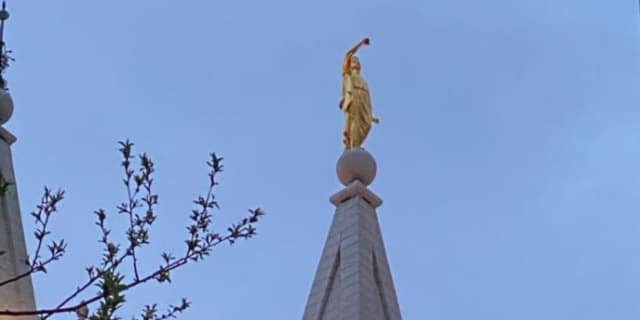 (LDS) – Residents of the greater Salt Lake area were jolted awake this morning by a 5.7 magnitude earthquake. Deseret News reported that there were multiple aftershocks following the earthquake felt across the valley. The Salt Lake Temple also felt the seismic waves.

Earthquake knocked the trumpet out of Moroni's hands pic.twitter.com/c0vzvqfPno

The shaking caused Angel Moroni’s trumpet to slip out of his hands. The temple is currently undergoing a major renovation including the installation of a base isolation system for when earthquakes occur.  Church spokesperson Daniel Woodruff issued the following statement:  The Salt Lake Temple, which is undergoing a seismic upgrade, sustained some minor damage during Wednesday morning’s earthquake.

The trumpet on the Angel Moroni statue fell off, and there is minor displacement of some of the temple’s smaller spire stones. No workers were injured. Crews on the job site have been sent home for the day, and a full assessment is underway to determine needs going forward. This event emphasizes why this project is so necessary to preserve this historic building and create a safer environment for all our patrons and visitors. Deseret News also reported that this was the largest earthquake in Utah since 1992 when a 5.9 magnitude earthquake hit St. George. Twitter users shared photos and videos of the Angel Moroni statue.  MORE