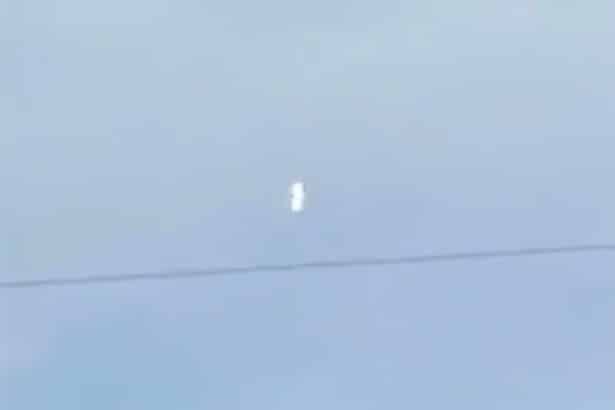 (Daily Star) – A cigar-shaped UFO matching the appearance of dozens seen across the US over 2019 has been spotted hovering over Florida. The short clip was taken on February 10 above a hotel in the city of Kissimmee.  It shows a bright white object moving at speed up into the clouds, bearing similarities to another seen back in October 2019. At one point, it seems to flash and then moments later it has disappeared.

The video was posted to Reddit by u/vinker1 who explained it was taken by his daughter. Viewers flooded into the comments section to offer their suggestions. Some believed the alien theory, with one writing: “Definitely a grey spaceship.”  Others suggested it could be a rocket launch, but this was dismissed by skeptics who claimed:

“there would be cloud plumes nearby”. Another possible explanation that was touted was that it could be a Mylar weather balloon. The “flashing” could simply be the sun reflecting off the metallic structure. YouTube conspiracy theorist The Hidden Underbelly picked up on the clip and shared his own thoughts. READ MORE