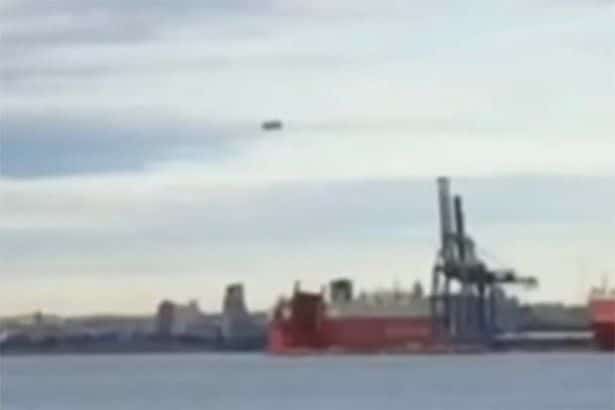 (DS) – A strange “craft” shaped like a cylinder and with “spheres circling it” has apparently been caught on camera hovering in the skies above Baltimore, Maryland. The footage begins with the cameraman exclaiming he is filming a “UFO over Baltimore” which is “huge”. At first, it seems the black object is circular but as it begins to move past the screen, its true shape becomes apparent. According to the witness, a “white sphere” was going around the crane at the same time, but that isn’t shown in the video.

He also said there were “several-cylinder objects” in the sky before he started recording. “They went up and down, in and out of the clouds and sometimes disappearing only to reappear again,” he added. The unnamed onlooker stopped recording to “pick up his mum” but then came across the sight again about an hour later. “On the way back we noticed two of the three crafts, but they were much further away,” he added. READ MORE