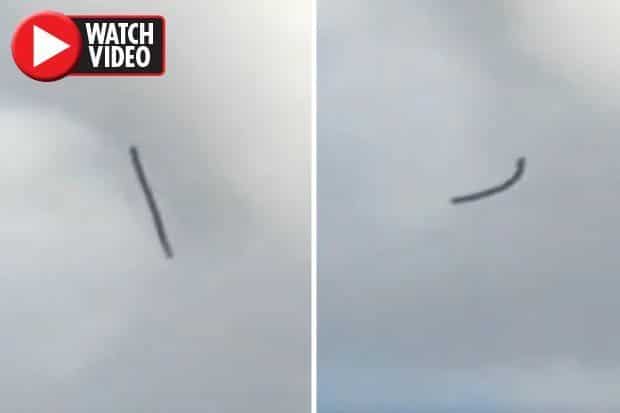 OPINION (DS) – A Snake-like UFO has been caught on camera for the first time in weeks, a conspiracy theorist has claimed. The conspiracy world was rocked last month after videos of cylindrical objects in the skies over the US emerged. It appeared the sightings had dried up, though, with the last clip emerging on July 13. But now, a resident in Clayville, New York, US, believes they may have filmed one on camera. The footage, posted to YouTube by beamsinvestgations1, shows a black cylindrical object hovering in the sky

on August 6. It seems to turn on the spot before its body scrunches up. The British Earth and Aerial Mysteries Society (BEAMS) quoted the witness as saying it was a “gigantic snake UFO” that moved “like it was alive”. Writing on their site, they said: “Look closely on a tablet, laptop or PC monitor and you will  see that this unidentified is comprised of segments or spheres… an intriguing, articulated body. “As the phone camera struggles to focus, it is patently obvious that the object in question is at a high altitude; so just as the witness described, it must have been ‘gigantic!’ READ MORE