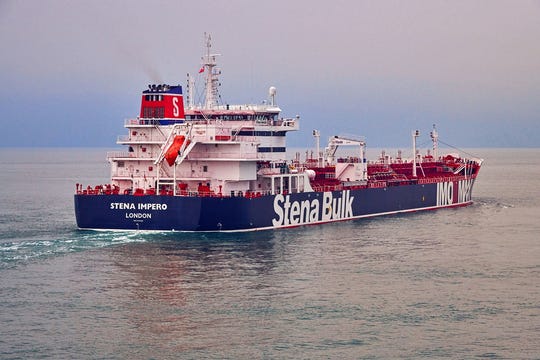 (USA Today) – Britain’s Foreign Secretary Jeremy Hunt warned Iran of “serious consequences” if it does not release a British-flagged oil tanker it seized in the strategic Strait of Hormuz waterway on Friday, although he ruled out “military options.” Hunt announced later in a tweet that he had spoken with Iranian foreign minister Mohammad Javad Zarif and “expressed extreme disappointment” that Iran had “behaved in the opposite way” of trying to deescalate the situation. The seizing of the “Stena Impero” potentially marks

the most significant escalation in tensions between Iran and the West since they began rising in May, about a year after the United States pulled out of an international accord aimed at Iran’s nuclear program. The Pentagon announced it authorized the movement of troops to Saudi Arabia as an “additional deterrent,” adding to the 1,000 troops deployed to the Middle East in June. The showdown has caused concerns around the globe, with each maneuver bringing fear that any misunderstanding or misstep by either side could lead to war. READ MORE