Russian Volcano Erupts for the First Time Since 1924 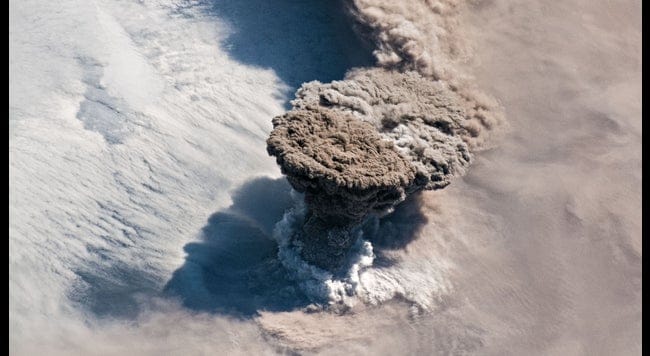 (TWC) – Raikoke Volcano on the Kuril Islands of Russia, south of the volcanically active Kamchatka Peninsula, erupted last weekend for the first time since 1924 and the images from space were out of this world. A large plume of ash and volcanic gases shot up from the stratovolcano’s 2,300-foot-wide crater about 4 a.m. local time on Saturday, June 22, ending a dormant period that had been ongoing for the past 95 years.

Several satellites, as well as astronauts aboard the International Space Station (ISS), captured stunning images of this thick ash plume as it rose and eventually streamed eastward, pulled into a storm system over the North Pacific Ocean. ISS astronauts shot the photograph below, which shows the volcanic plume rising in a narrow column and then spreading out in a part of the plume known as the umbrella region. That’s the area where the density of the ash plume becomes equal to that of the surrounding air, causing the plume to stop rising, NASA said. READ MORE