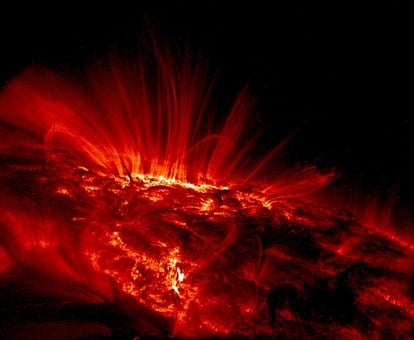 OPINION (Express) – NASA has warned a solar storm similar to the 1859 Carrington Event will eventually decimate Earth. But a Harvard professor famed for his Oumuamua extrasolar asteroid theory has proposed an innovative $100billion solution. On the morning of September 1, 1859, as amateur astronomer Richard Carrington sketched an unusual cluster of sunspots, our star erupted in a fierce flash. An unfathomable amount of

energy stored in the Sun’s magnetic field was released, propelling incredible amounts of energy on a collision course with Earth. Carrington had witnessed a solar flare and the subsequent coronal mass ejection that would hit Earth 17 hours later resulted in a geomagnetic storm of such strength that it would become worldwide news. Now, in a world increasingly reliant on technology, the consequences of a similar solar storm hitting would be far more damaging, according to Professor Abraham Loeb, chair of Harvard’s Astronomy Department. Professor Loeb told Express.co.uk: “A Carrington-type event would cost roughly $2-3trillion [£1.5- 2.3trillion] told, in terms of infrastructure damage. READ MORE